Information only about Chobe.

Camps, tours and activities are to be found at Botswana Safaris.

Chobe National Park offers a wide range of Africa Safari experiences that include:

The great elephant gathering in the Chobe River system is the big draw card for this area.It has a real magic about it.

The great elephant gathering in the Chobe River system is the big draw card for this area.While it is not  a major wilderness area, it has a real magic about it. You wildlife game view by game drives and by sunset river cruises.

The Chobe National Park, which is the second largest national park in Botswana and covers 10,566 square kilometres, has one of the greatest concentrations  of game found on the African continent. Its uniqueness in the abundance of wildlife and the true African nature of the region, offers a safari experience of a lifetime.

The park is divided into four distinctly different eco systems: Serondela with its lush  plains and dense forests in the Chobe Riverarea in the extreme north-east; the Savuti Marsh in the west about fifty kilometres north of Mababe gate; the Linyanti Swamps in the  north-west and the hot dry hinterland in between. 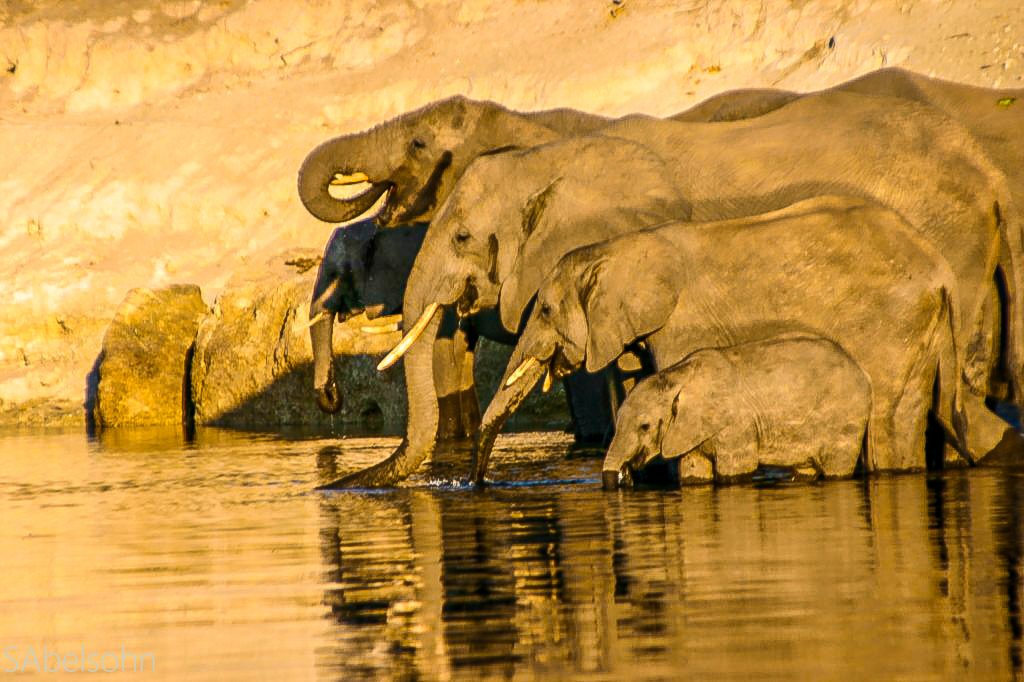 A major feature of Chobe  National Park is its elephant population.

First of all, the Chobe elephant comprise part of  what is probably the largest surviving continuous elephant population.

This population covers most of northern Botswana plus northwestern Zimbabwe. The Botswana’s elephant population is currently estimated at around 120,000. This elephant population has built up steadily from a few thousand since the early 1900s and has escaped the massive illegal offtake that has decimated other populations in the 1970s and 1980s.

The Chobe  elephant are migratory, making seasonal movements of up to 200 kilometres from the Chobe and Linyanti   rivers, where they concentrate in the dry season, to the pans in   the southeast of the park, to which they disperse in the rains.   The elephants, in this area have the distinction of being the largestin body size of all living elephants though the ivory is brittle   and you will not see many huge tuskers among these rangy monsters.

The original inhabitants of what is now the park were the San people, otherwise known in Botswana as the Basarwa. They were hunter-gatherers who lived by moving fromone area to another in search of water, wild fruits and wild animals. The San were later joined by groups of the Basubiya people and later still, around 1911, by a group of Batawana led by Sekgoma.

When the country  was divided into various land tenure systems, late last century and early this century, the larger part of the area that is now the national park was classified as crown land.

In 1931 the idea of creating a national park in the area was first mooted, in order
to protect the wildlife from extinction and to attract visitors. In 1932, an area of some 24,000 square kilometres in the Chobe district  was declared a non-hunting area and the following year, the protected  area was increased to 31,600 square kilometres.

However, heavy tsetse fly infestations resulted in the whole idea lapsing in 1943. In  1957, the idea of a national park was raised again when an area    of about 21,000 square kilometres was proposed as a game reserve   and eventually a reduced area was gazetted in 1960 as Chobe Game Reserve.

Later, in 1967, the reserve was declared a national park the first national park in Botswana. There was a large settlement,  based on the timber industry, at Serondela, some remains of which   can still be seen today. This settlement was gradually moved out and the Chobe National Park was finally empty of human occupation in 1975. In 1980 and again in 1987, the boundaries were altered,  increasing the park to its present size