Information only.Camps,activities and safari tours are to be found at Botswana Safaris.

The Okavango Delta is one of the world’s largest inland water systems. It’s headwaters start in Angola’s western highlands, with numerous tributaries joining to form the Cubango river, which then flows through Namibia (called the Kavango) and finally enters Botswana, where it is then called the Okavango.

Millions of years ago the Okavango river use to flow into a large inland lake called Lake Makgadikgadi (now Makgadikgadi Pans).

About the Okavango Delta:

The Moremi reserve, hunted by the bushman as  long as 10,000 years ago, was initiated by the Batawana tribe and covers some 4,871 km, as the eastern section of the Okavango Delta.

The  Moremi reserve is mostly described as one of the most beautiful  wildlife reserves in Africa. It combines woodland and  forests, floodplains and lagoons.

It is the great diversity of plant and animal life that makes the Moremi  reserve so well known.

The Moremi reserve contains within its boundaries approximately twenty percent of the Okavango Delta. 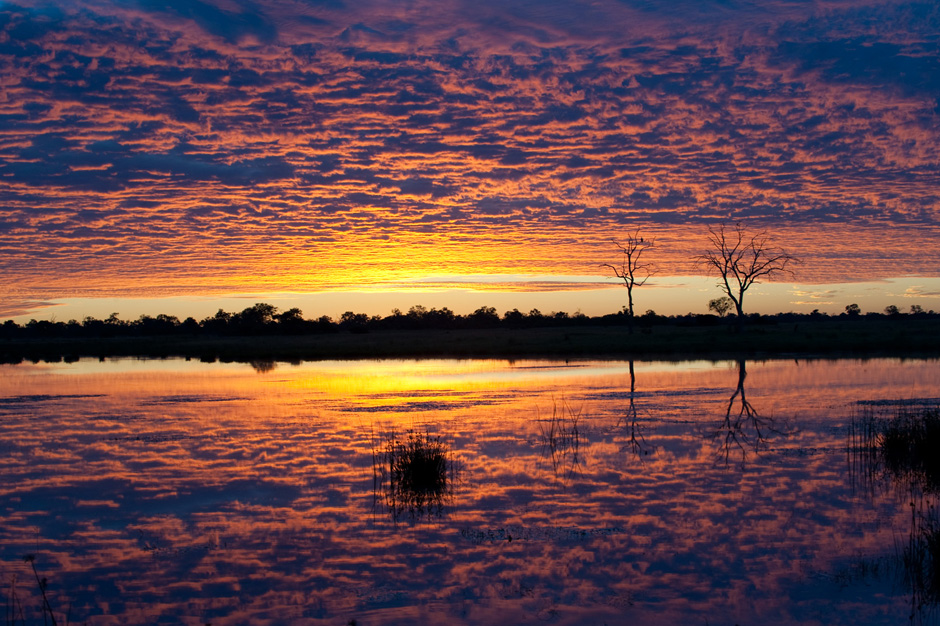 Tectonic activity and faulting interrupted the flow of the river causing it to backup and form what is now the Okavango delta. This has created a unique system of water ways that now supports a vast array of animal and plant life that would have otherwise been a dry Kalahari savanna.

The delta’s floods are fed from the Angolan rains, which start in October and finish sometime in April. The floods only cross the border between Botswana and Namibia in December and will only reach the bottom end of the delta (Maun) sometime in July,

Taking almost nine months from the source to the bottom. This slow meandering pace of the flood is due to the lack of drop in elevation, which drops a little more than 60 metres over a distance of 450 kilometres. The delta’s water deadends in the Kalahari – via the Botetle river, with over 95 per cent of the water eventually evaporating.

The areas surrounding the delta are beginning to try out (the rains in Botswana occur approximately the same time as in Angola) and the wildlife starts to congregate on the edge of the newly flooded areas, May through October.

The delta environment has large numbers of animal populations that are otherwise rare, such as crocodile, red lechwe, sitatunga, elephant, wild dogs, buffalo, wattled crane as well as the other more common mammals and bird life.

The delta environment has large numbers of animal populations that are otherwise rare, such as crocodile, red lechwe, sitatunga, elephant, wild dogs, buffalo, wattled crane as well as the other more common mammals and bird life.

Safari activities by water are the primary speciality of the Okavango – the mokoro – a dug out canoe which is ‘poled’ along by your Guide is the most evocative way of exploring the numerous waterways. Motor launches travel on the main waterways and lagoons.

Traditional 4×4 Game viewing vehicles are used on the main islands, with night drives available in the private concession areas – not allowed within the National Park.

Walking Safaris are available from most Camps and Lodges – perhaps the most exciting way of viewing Game – stalking and tracking wildlife with an expert Guide.

Game Viewing flights are available by both light aircraft and helicopter, but hot air ballooning is not allowed.