You decide on the  lodge,or I will give you some options..together we will create your South Africa Safari. 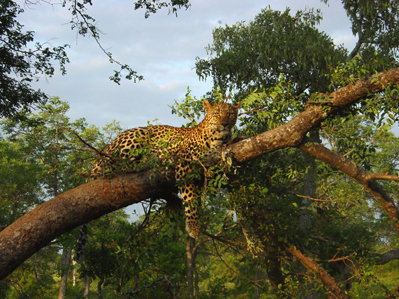 Sample of Sabi sands private Lodges-there are others:

The original Sabie Game Reserve was proclaimed by President Paul Kruger in 1898 and later the Kruger Park extended to its present size of approximately 19,000 square kilometers or 8,000 square miles.

It extends from the Limpopo River in the north to the Crocodile River in the south, a distance of nearly 380 kilometers. To the east it borders with Mozambique and on the west it joins many of our private game reserves.

There are no restricting fences between the Kruger Park and Sabi Sands and the wildlife roams freely between the two game reserves. Because there are no fences, the animals can wander between the two as they please and as they once did across vast stretches of grazing land.

Leopards are a main attraction of the Sabi Sands Game Reserve and are so accustomed to cars that they do not take much notice of them.

Even when hunting, a leopard in the Sabi Sands Game Reserve will not mind a vehicle following it, even if this means following it off-road though the bush.

Approximately 300 species of bird have been observed in the Sabi Sands Game Reserve including a diversity of summer migrants.

A variety of snakes, lizards and tortoises and other reptiles have also been seen, mainly during the summer months.

Some of the best and most exclusive private game lodges in the country are in the Sabi Sands Game Reserve and the chances of seeing the Big 5 animals (lion, leopard, buffalo, elephant and rhino) are excellent.