Approximate per night rate :   From $650 per person per  night

Explore the pristine and unspoilt wilderness of the South Luangwa with one of the country’s most experienced guides while staying in luxurious classic under canvas style tents – this is the ultimate bush adventure by foot.

We have chosen the perfect location for a walking safari camp in the South Luangwa. It was in this park that “walking safaris” first made their debut and it is undoubtedly one of the most exciting ways to experience the sights, sounds and smells of the bush.

Sanctuary Zebra Plains is perched on a sand bank at the confluence of the Luangwa and Chibembe Rivers.

The unspoilt bush around camp is home to large populations of zebra, elephant, buffalo, crocodile and puku, as well as various endemic species and over 400 bird species.

The diversity of habitats here provide from some of the most spectacular walking in Africa over terrain that is ideal for exploring with plenty of shade and long sweeping views. 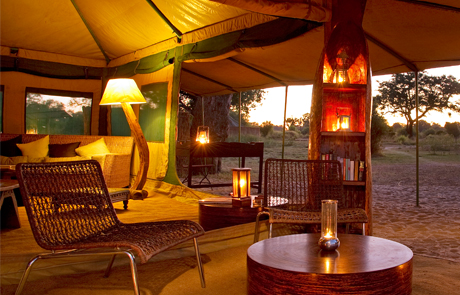 Sanctuary Zebra Plains is a luxury safari camp with just four traditional tents – two doubles and two twins. The camp accommodates a maximum of six guests, allowing for an intimate exploration of the South Luangwa.

All tents have real beds, campaign furniture, mosquito nets, en suite facilities and flush toilets. Water for al fresco showers is mixed to your preferred temperature by a tent attendant.

The main mess tent has a dining area although most of the gourmet meals will be served in the open in carefully selected vantage points .

There is also a small library and bar area.

This is a seasonal camp which operates from June to October each year. Sanctuary Zebra Plains has been designed to leave the lowest possible carbon footprint and is packed up completely each year with no trace that it was ever there between seasons.

Garth Hovell, a safari guide with almost twenty years of experience, will lead walks twice a day. There will be a morning and afternoon walk each day. Garth will share with you some of the most fascinating, yet easily missed, sights and sounds of the bush.

One morning you might wander along a river bank, observing hippos before canoeing across to a large island across from camp to get up close to plains game.

Later that day you may choose to explore nearby Zebra Plains where buffalo, elephant and eland gather in large herds on the open savannah, a rarity in the wooded terrain of the South Luangwa.

Another day your destination might be the Changwa Channel, featured in David Attenborough’s “Life” series and home to one of the largest hippo populations on earth.

However it’s not just the big animals that are fascinating – termites, dung beetles, chameleons and the prolific bird life all have their stories to tell.

You will be also be accompanied by an armed games scout as well as a Sanctuary tea bearer who will make fresh cups of tea or coffee in the middle of the bush using a stainless steel kettle and traditional fire making skills.