A Victoria Falls stopover can be designed for either the Zimbabwe or Zambia side.

From about April to July/August its best viewed from the Zambia  side.

From about August /September time frame a tour of Victoria Falls is best done via the Zimbabwe side of the falls. 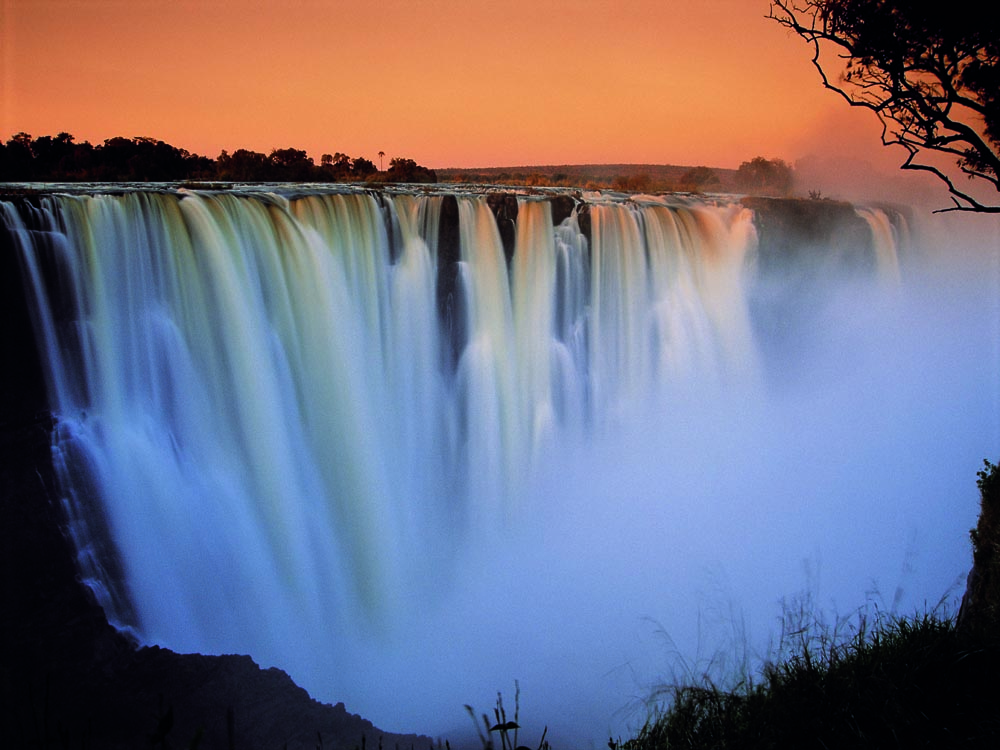 An idyllic,exclusive camp on our very own private isle on the Zambezi River

Just a short drive away from the world famous Victoria Falls, Sussi & Chuma is built on a dramatic bend in the Zambezi.

Tongabezi is a luxury lodge near Victoria Falls on the banks of the Zambezi River.

Set on the banks of the Zambezi river, not far from the Falls

Our  Victoria Falls tours Include:

The location of the falls allows one to include a Botswana Safari and or a Zimbabwe Safari in addition to the tour of the Victoria  Falls,with relatively ease and flow.

Since you are all ready in Zambia you have all the vast, remote and varied Safari concession areas of Zambia to choose to Safari in.

We can also design a combination Chobe Botswana as its only a 90 minute car/boat transfer away from Victoria falls,with some of the Safari parks in Zambia for a varied multi destination Safari experience.

Feb to April. In full flood years the falls cannot be seen on foot on the Zimbabwe side with clouds of spray rising high into the sky and drenching all tourists. The aerial view at this time however is spectacular.

The Zambian side of the falls with less water is better at this stage and there are walkways to look out points and across the swaying Knife Edge bridge.

The intense spray provides welcome relief from the heat, but don’t carry anything you don’t want to get wet!

A walk in the Rainforest or “highway to heaven” keeps you at eye level with sheets of cascading water, being soaked by the misty breath and deafened by its thunderous roar

April and May. The falls are at their most spectacular on foot but often the spray is so thick it is difficult to see the full width of the falls, and the weather is magic.

From May onwards as the annual flood abates, the view of Victoria falls gets better and better and photographic opportunities from the Rain Forest path in Zimbabwe improve and most of the falls can be seen from this side.

The weather is still fantastic.

Around November and December . It is just as interesting to come when the water is low. Visitors are able to fully appreciate the geological formation of the falls and the full length and breadth of them.

Low water season’s gifts are:
* one can walk along the lip of Victoria Falls on the Zambian side and swim/picnic At this time most the water falls at ” Devils Cataract” on the Zimbabwe side

The most popular Victoria Falls tours is the Tour of the Victoria  Falls, and the sunset Cruise on the Zambezi River. The Victoria Falls can be a self guided experience as well. Rain gear is needed, and is rented at the falls.There are  craft markets on both side of the falls,and many other tours.

The Victoria Falls area is rapidly becoming known as the ‘Adventure Centre’ of Southern Africa, with various adrenaline sports, unmatched scenery of breathtaking proportions, and many other leisure options for outdoor lovers.Lion, elephant, cultural,aerial tours, adventure ie rafting, canoeing, etc, are all available.

Sample  actvites:
Whitewater Rafting through Batoka Gorge
Bungi Jumping off the 111m high Victoria Falls Bridge
Canoeing on the upper Zambezi
Horseback Trails along the Zambezi and surrounding Teak forests
River Boarding mega thrills on the Zambezi rapids
Abseiling off the sheer cliffs of Victoria Falls Gorge
Tandem Kayaking An experienced kayaker will take you through the raging rapids of the Zambezi
Microlighting over the falls
River Safaris, Quiet jet-propelled boats take you into remote parts of the upper Zambezi
Elephant back Safaris Tame elephants give the best view for gameviewing in the Reserve.
Jet Boating – hi speed jet propelled boats take you down the rapids.

The best place for a wide range of crafts and curios is the Mukuni Victoria Falls Craft Village. From intricate animal carvings in stone, wood, or the beautiful green malachite, masks, drums, marimbas, spoons, book ends, walking sticks, jewellery and much more. The vendors can be really pushy however, yelling for your attention from all sides, so be firm. Look at everything before buying as some offer better quality than others.

They are usually happy to trade for things like T shirts, batteries, shoes, or anything else hard to come by in Zambia. You’ll find it in the parking area just above the Falls where most of the walks begin and alongside the Victoria Falls Field Museum. This little museum attempts to explain how the falls were formed over the millenia. It is built over an actual excavation site that has uncovered evidence of early hominids who lived in the area as far back as 2.5 million years ago.

Mosi O Tunya National Park is situated along the upper Zambezi stretching from and including the Falls for about 12kms up river. It is only 66 square kilometers but provides a home for numerous antelope species, zebra, giraffe and the recently acquired white rhinos, one of whom gave birth in the park in 1994.

These are the only rhinos to be seen in Zambia as its previously large population has been completely eliminated through poaching. One can take a pleasant drive around the park in a couple of hours and almost all the species there should be seen at close range. Since there are no predators, they are very relaxed and afford some excellent photo opportunities.

Mukuni Village is an authentic tribal village where thousands of people live and work. In July of each year the Leya people partake in the colorful Lwiindi Ceremony. The local people believe the spirits of their ancestors still dwell in the gorges of the Falls and during the Lwiindi, they offer sacrifices to them for rain.

Described by the Kololo tribe living in the area in the 1800’s as ‘Mosi-oa-Tunya’ – ‘the Smoke that Thunders’ and in more modern terms as ‘the greatest known curtain of falling water’, Victoria Falls are a spectacular sight of awe-inspiring beauty and grandeur on the Zambezi River, bordering Zambia and Zimbabwe.

Columns of spray can be seen from miles away as 546 million cubic meters of water per minute plummet over the edge (at the height of the flood season) over a width of nearly two kilometers into a deep gorge over 100 meters below.

The wide basalt cliff, over which the falls thunder, transforms the Zambezi from a wide placid river to a ferocious torrent cutting through a series of dramatic gorges.

Facing the Falls is another sheer wall of basalt, rising to the same height and capped by mist-soaked rain forest. A path along the edge of the forest provides the visitor who is prepared to brave the tremendous spray with an unparalleled series of views of the Falls.

One special vantage point is across the Knife edge bridge, where visitors can have the finest view of the Eastern Cataract and the Main Falls as well as the Boiling Pot where the river turns and heads down the Batoka Gorge. Other vantage points include the Falls bridge and the Lookout Tree which commands a panoramic view across the Main Falls.

The scale is massive, the spectacle spellbinding and perpetually changing. The falls hiss and roar as if possessed, they rumble and crash like thunder.

Vast clouds spew and billow out from the seething cauldron of its dark impenetrable depths.

The moving water creates a magnetism that sucks you closer, so that you recoil in horror to quench a subliminal sacrificial urge.” (Jumbo Williams, Zambezi, River of Africa. 1988)

The Victoria Falls Bridge was commissioned by Cecil John Rhodes in 1900, although he never visited the falls and died before construction began, he expressed his wish that the “railway should cross the Zambezi just below the Victoria Falls. I should like to have the spray of the falls over the carriages.”

The bridge affords a magnificent view both down the gorge on the one side and through to the falls on the other.

The immense depth of the gorge can be fully appreciated from this perspective and combined with the sea green river below, the shiny black rock face and lush green foliage, the 360 degree view from the bridge is breathtaking.

Aerial view of the Falls:

To fully appreciate the incredible size of the Falls, and the awesome power of the water as it carves into the deep zig zagging gorges for eight kilometers, one must see it from the air.

Micro-light and fixed wing flights are available. The pilot will take you along the wide tranquil upper Zambezi, and over the huge 2 km rent in the earth.

The breathtaking sight of this magnificent natural phenomena, seen in all its glory from the air, is unforgettable.

Walks in the Victoria  Falls  area.

On the opposite cliff, facing the falls, you can take a well marked and paved walk through the rain forests. Every so often the path will open out into a clearing for a view of the falls.

Further along this path is the Knife Edge Bridge which affords an impressive panorama depending on the time of year.

Although less can be seen of the width of the Falls during the wet season, the intense spray provides welcome relief from the heat, but don’t carry anything you don’t want to get wet!

During the dry season, be sure to take a walk along the lip of the Falls themselves. Sometimes the water is low enough to walk all the way across to Livingstone Island, the place where David Livingstone had his first glimpse of the Falls. This is surely one of the most magnificent views in the area.

Another interesting perspective is deep within the gorge into which the Falls descend. From the parking lot, look for the signs pointing to “The Boiling Pot.” It’s quite a steep climb, but well-worn steps make it a fairly easy descent.

Coming up is of course a little more strenuous, but the view from below of the wide Zambezi thundering over the cliff, then compressed into the deep thin crevice turning into the Batoka Gorge, crashing and swirling over rapids, is quite spectacular.

From this vantage point one can also see up to the impressive Victoria Falls Bridge, spanning the gorge over 100 meters above.