While this Dolphin and Whale Route is a self drive we can modify to a private or escorted/part self drive,as well.

If you want to see whales,the timing of this Dolphin and Whale Route is important.

About the Dolphin and Whale route:

The southern right whales arrive towards the end of June,and stay till October,with a few stragglers hanging around till early November.

The humpback whales usually hang around between April and October,although they have been known to stay a bit longer.

Of course, you can see whales and dolphins at other places along the coast,but these tour spots are the most consistent/user-friendly. 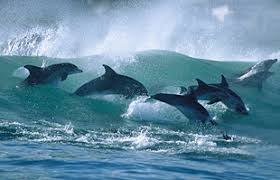 Fly in to Cape Town and settle in to your hotel or B&B.

Your best options are obviously a place near the sea and False Bay is the most reliable southern right spotting area.

Explore Cape Town,checking out the whales all the while.You may like to visit the Two Oceans Aquarium (which does not keep captive cetaceans).A trip to Seal Island will reward you with the sight of hundreds of Cape fur seals.(There are two Seal Islands, either will do.)

If you take a boat ride from the Waterfront,you may see the rather shy and endemic dusky dolphin,as there is a small colony off Three Anchor Bay.

If you are energetic,you may paddle out on a sea kayak to Seal Island off Hout Bay,and/or off Three Anchor Bay where you may see the dusky dolphins and perhaps a seal or two.

Drive to Hermanus and walk along the cliff top,where you will have fantastic sightings of southern rights.Also visit the new harbour, where the whales often swim mere metres from the breakwater.

It’s also worth driving to the other side of Walker Bay to see the whales from the cliff top at Gansbaai.

Take a scenic drive to Plettenberg Bay stopping at Arniston and/or Cape Agulhas which is the southernmost point of Africa.

Take a boat ride to see the dolphins and whales.You are likely to see bottlenose dolphins, probably humpback dolphins, and will certainly see Cape fur seals at their colony on Robberg Peninsula.

The southern rights are pretty easy to spot in season, and you may see orcas or Brydes whales at any time (although they are not particularly common.) From April to October your quite likely to see humpbacks and their calves.

So the best possible time is between August and September when you stand a good chance of seeing three or perhaps more, cetacean species in one day. (The record for Plett is 7 different species of marine mammals in one day: humpback dolphins, bottlenose dolphins, common dolphins, southern right whales, humpback whales, Brydes whales and Cape fur seals).

You could also do a sea kayaking trip during which a whale or dolphin may well swim past, and there are numerous scenic flights on offer, which take you right over the bay affording a gull?s eye view of the lovely leviathans.

Take a leisurely drive to Port Elizabeth, stopping over at the Tsitsikamma National Park for lunch, where its quite likely you will see whales or dolphins from the restaurant.Either stay over in Port Elizabeth or fly out.