A small group of very secretive elephants still live in the Knysna forests.

The water-based life of the Garden Route National Park is just as rich – lagoons and strings of shining lakes begging to be explored by canoe.

This wilderness is counterpointed by pleasant coastal towns like Knysna, Plettenberg Bay and Sedgefield, where you can eat fresh oysters, drink locally brewed beer, swing from bungies, whizz through forest canopies, or simply relax on a long, clean beach.

In truth, this is not a single block of conserved land. Instead, it is a daring new experiment in conservation. A mosaic of protected areas sprawled along the country’s south-eastern coast have been gathered under one management plan. They include the peerless Tsitsikamma National Park, Wilderness National Park and linking them, the Knysna National Lake Area, Soetkraal Wilderness and Conservation Area, and the Robberg and Goukamma Nature Reserves.

Although the Garden Route National Park is punctuated by human settlement, the pristine sections are some of the most dramatic and beautiful in the country. The hiking options available in the Garden Route are excellent.

From the raw tang of sea breezes, to children’s laughter on beaches, to the rush of sweet forest, this is a land that engages all the senses. No two people experience it in the same way. 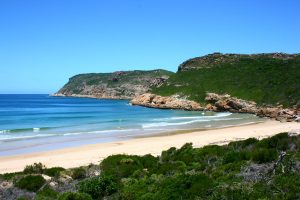 About the The Garden Route

The Garden Route thoroughly deserves its reputation for enchanting beauty. The ‘Garden’ refers not to cultivated gardens, but to its captivating,

Edenesque qualities with indigenous forests of tall yellowwoods and milkwoods covering the slopes of the Outeniqua and Tsitsikamma mountains.

This region, between Mossel Bay and the Storms River, offers a spectacular coastline of dramatic headlands giving way to white sandy beaches.

Behind the sand dunes lie placid lagoons and lakes, with a hinterland of soaring mountains, covered by indigenous rainforest, magnificent twisting passes, waterfalls and wooded ravines.

The Garden Route area is perfect both for those wanting to relax in a beautiful area and for those wishing to be more active. There are walking and hiking trails by the lakes, along the coast and in the mountains.

This pleasant town, named after George III of England, lies on the coastal plateau below the Outeniqua Mountains, and is the principal town of the Garden Route, a bustling business and farming community, producing vegetables distributed throughout the country, hops for the brewing industry, and dairy products.

Initially forestry was its prime industry, but exploitation of the extensive indigenous forest became so rife that in 1936 the government declared a 200-year ban on the felling of indigenous trees.

Today large plantations of exotic tree species exist and forestry is still the backbone of the area’s economy. Fortunately large tracts of indigenous forest have been saved. ·

The George Museum is most interesting for its forestry theme and also its collection of memorabilia associated with PW Botha, one of the former Nationalist Presidents during the Apartheid era. ·

The Outeniqua Transport Museum is open every day and preserves many items of South African railway memorabilia.· The Outeniqua Power Van is a motorised trolley, which offers trips deep into the Outeniqua Mountains from where the most scenic view of the Garden Route can be experienced.

Departs from Outeniqua Transport Museum· Experience traditional Xhosa craft and culture at the Khulani Xhosa village. Enjoy a cup of Xhosa beer and bread while feeling the rhythm of Africa through singing, dancing, story telling and traditional rituals. Tel: (044) 880 2250·

Botlierskop Game Farm is situated just off the N2 approximately 30 mins drive from George. It is blessed with a great diversity of habitat and wildlife. Visitors have a good chance of close encounters with rhinos, lions, buffalo, giraffe, rare black impala and many more, in an exhilarating 3-hour guided game drive. This unique 4×4 game viewing drive in an open vehicle is a stimulating mix of bush craft and game viewing. Traditional African dinners are served in an elegant thatched roof and volcanic rock restaurant. Tel (044) 696 6055.·

The Garden Route Botanical Garden at the top of Caledon Street offers year-round opportunities to view the local flora. WildernessThis quiet village with a gorgeous beach is a nature lover’s paradise known for its lakes, placid lagoon and lush indigenous forest. Enjoy a lovely peaceful walk around the lake shore on the boardwalk or stroll along the beach. (The beach is not safe for swimming due to strong undercurrents.)

Explore some of the back roads around Wilderness where you can visit the “Map of Africa” deep in the forest.

The Wilderness National Park, covers much of the surrounding country and is a wetland paradise for over 230 different bird species. Five different species of kingfisher occur here.

Its rivers, lakes and estuaries are also home to the Knysna Loerie, Tauraco corythaix and the elusive Bos-Loerie. Various nature trails traverse the lakes, the beach and the indigenous forest such as the 10km Pied Kingfisher trail.

The boardwalk along the Touw river is very good for bird-watching whilst there are also a couple of hides in the park itself. Open daily 0800 to 1700.

Knysna is an attractive little town on the edge of the glorious Knysna lagoon, backed by the magical Knysna forest with its great yellowwood trees and massive ferns some 3 metres high.

The sea approach to Knysna through the Heads was so hazardous in the 19th century that Knysna never developed as a major port for the region and it was only in the 20th century that it has grown as a resort town.

Indeed at the height of the season it can be too busy but at other times it is a charming town full of restaurants, coffee shops, arts and craft shops and galleries.·

Drive up to the Heads, two sandstone buttressed cliffs at the mouth of the lagoon.

We recommend that you first drive via George Rex Drive to the summit of the heads for a lovely view of the town, the lagoon and the ocean. Then retrace your steps to the mini-roundabout and take the road to the base of the Heads.

Here you could have lunch overlooking the lagoon entrance.

There is also a small beach here at low tide, which offers delightful bathing. There is a pleasant wooden chalet for changing with clean showers and toilets.·

Take a boat cruise on the Knysna Lagoon. You can choose between 1½ hour and longer trips.

The John Benn ferry departs at lunchtime and for sundowner cruises. Light meals, oysters and drinks are all available on the boat. Departs at 1230 and 1800 in summer (1700 in winter).

Extra departures in high season. Departing every two hours from 1100, as well as sailing through the Heads out to sea on a catamaran (weather permitting). Particularly special is their champagne and oysters sunset cruise. Booking is essential on (044) 3825520. ·

The endangered Knysna Seahorse, an unusual fish that’s found only in Knysna,

Plettenberg Bay and Sedgefield, can be viewed here. Refreshments are available at the reserve’s restaurant. Daily at 1000 (4 hour excursion) and also 0900, 1115 and 1230 depending on demand.

Shopping at the many art and craft shops or the factory shops. Over 150 artists and craftspeople live in Knysna. See their wares at Bitou Craft (Knysna Quays), De Ou Fabriek (Main street) and Woodmill Lane amongst others.

See the Arts and Crafts Map for specific suggestions such as the Jack Lugg Art Gallery on Queen Street, African Attitude and Zawadi both on Main Road, or Feathers Gallery also on Main Street.· Enjoy lunch at Knysna Quays, Knysna’s waterfront with restaurants, curio shops, and marina and lovely views of the lagoon.·

Visit the Oyster farm, which has 13ha of the lagoon as its aqua farm. The farm is one of the largest single producers of oysters in the world and packs 300 tons each year. You can taste the oysters and buy some oysters to eat later, and you also learn about the farming process. Open from 0900 to 2200 daily. Contact them on (044) 3826941. ·

Visit Millwood House on Queen Street, one of the original houses from Millwood gold mining village that was re-erected in Knysna. It houses a collection of unique old photographs of Millwood and Knysna.

Explore the Knysna forest by car (see Suggested Drives below). The felling of the indigenous forest was largely responsible for the decline in numbers of the famous Knysna elephants from 500 elephants in the 1870’s to extinction now. (The last remaining elephant was translocated to Shamwari recently).·

Visit the Knysna Township and discover African hospitality. You may visit a sangoma, learn a little bit of African history, visit a shebeen, sample some local African beer, visit a local pre-school community project and learn about the impact of the Government housing project.

No aspect of the tour is pre-staged so all events are of a spontaneous nature. The tour also involves a 4km off road walk through some spectacular scenery. Booking is essential via The Adventure Centre. Contact them on 083 2698501.·

In the centre of Knysna, within a two-minute walk of the Main Street, the 10 hectare Pledge Nature Reserve was developed by the Knysna community. All alien trees were removed and natural fynbos allowed to regenerate. Walk along well defined paths – many of the trees have been marked – or just sit and relax at the pools.