The Karoo is an acquired taste. It consists mostly of wide open spaces, interspersed by flat-topped, steep-sided mesas and kopjes (buttes).

The colours at sunrise and sunset are spectacular, with the drab ochres of the day giving way to dramatic purples, indigoes, violets, pinks, reds and oranges.

And there are few places on earth that can compare with the Karoo for spectacular diamond-studded night skies. 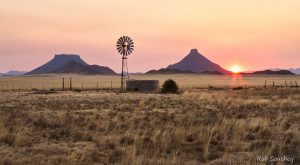 At first glance, the vegetation seems insignificant, but closer inspection reveals a wealth of fantastic, small succulent plants and some hardy shrubs.

In spring, many of them burst into bloom, transferring the sear plains into a riot of colour.

This is traditionally sheep farming area and the many small towns reflect a bucolic sleepiness, as well as showcasing some very pretty Victorian houses.

Many farmers are now realising that the land they previously thought of as useless is now bringing in as much, or even more than the sheep pastures.

For on the edges of these vast plains lie lovely almost unexplored mountains, with deep gullies, pretty streams, and overhangs filled with rock art. And even the older buildings one-roomed stone cottages, corbelled huts and old stone sheds, are coming into their own as they are renovated as tourist or hikers accommodation.

There are also two notable national parks the Karoo National Park and the Mountain Zebra National Park, both of which are greatly worth a visit. And there are a few surprising destinations.

The towns of Graaff Reinet and Cradock offer a wealth of cultural attractions, as well as some great accommodation and eating establishments, and the nearby Nieu Bethesda is the site of South Africas best known outsider art the Owl House, created by Helen Martins.

Nothing happens very fast in the Karoo. Its a place to go to relax, to sit back and watch time move over the hills.

This Karoo townGraaff-Reinet is a little out of the way, so its not included on most itineraries. This is a pity, as its one of the Eastern Capes most interesting settlements.

Pretty much a cultural and erudite destination, this lovely town has a surprising number of art galleries, museums, monuments and magnificent buildings.

The Old Drostdy, built in 1806, was the magistrates court and residence until it was sold in 1847 and then became a hotel in 1878. After many architectural changes, and subsequent restoration, it is once again a hotel but is worth visiting just to see it. And the dining room has quite a reputation for traditional South African food.

Other fascinating attractions include the Hester RupertArt Museum, a number of museums set up in stately homes, and a fascinating collection of Cape Silver in the magnificent sandstone Dutch Reformed Church, which dominates the town with its central location and high steeple. 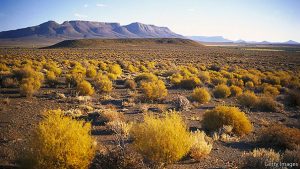 Close to the town is the rugged, and aptly named,Valley of Desolation, and the charming hamlet of Nieu Bethesda, with its well known Owl House.

A town in the karoo..Beaufort West

Beaufort West is the archetypical Karoo town. Surrounded by farmland, and approached on a long, straight road from either direction, it’s almost an oasis.

Many people just zip through here, stopping only for fuel and a snack, but it’s an attractive town with an interesting museum complex. Most of the exhibits relate to the life, history, and career of one of the town’s most illustrious sons the heart transplant pioneer surgeon, Chris Barnard.

It is also a very convenient overnight stop if driving between Cape Town and johannesburg. Its about 500 km from Cape Town and 900km from Johannesburg and there are a number of inexpensive accommodation options.

A far more worthwhile way to break your journey, though, would be to stay at the wonderfully scenic Karoo National Park, which is worth a visit for its own sake.

It is conveniently situated about 10km on the Cape Town side of the town. With lots of different birds, many species of antelope, and black rhino, its an attractive and exciting place to stay. Even if you only spend one night here, you could arrive early enough for an afternoon drive or walk if you’re driving from Cape Town, or a morning expedition if you’re heading the other way.

A bonus is the short interpretive “hands on” fossil trail, which is wheelchair accessible and has interpretive Braille plaques.